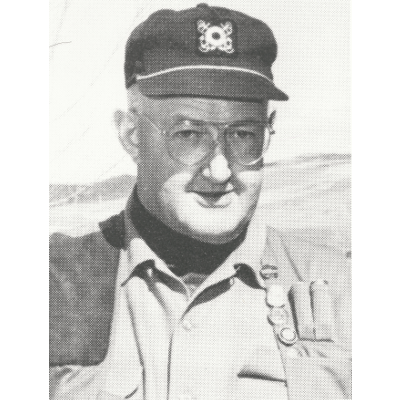 AE (Sonny) Boyd was born in Boise, Idaho in 1912 and except for military service during World War II he lived there until his death in 1982. He spent 28 years with the police department and retired with the rank of captain.

He began shooting in 1934 and at his first state shoot he tied for the handicap championship, missed his first shoot-off target, and lost the championship 24 to 25. Three years later he won the handicap championship outright and was on his way to winning hundreds of trophies and awards along with 19 state championships over the next 48 years. He was also the only shooter to be chosen on both the first Idaho Amateur Trapshooting Association (ATA) All Start Team in 1962, and the first Idaho Pacific International Trapshooting Association (PITA) All-Star team in 1973.

Although Sonny often did not shoot enough targets to quality for high average consideration, when he did he was usually near the top for Idaho shooters. In 1963 he was listed as one of the leaders for both doubles and handicap and for 1969 through 1973 he was one of the leaders in the doubles category each year.

From 1962 through 1973 Sonny mad eight of the twelve ATA All Star State teams and was the captain on three of them.

Sonny had been involved with the Boise Gun Club for all of his shooting career and had served on the board of directors and had helped with several club moves to new locations include the present one. He was awarded and honorary life membership to the Boise Gun Club for his support and contributions over the years.

He was also one of the all-time great humorists and storytellers to ever bring enjoyment to a trapshoot. A trip to a shoot with Sonny was an event that was often discussed and retold more than the events of the shoot itself.

AE (Sonny) Boyd was a many-time champion and one of the most colorful personalities that Idaho trapshooting has ever seen. It is fitting that he be given the honor of selection into the Idaho Trapshooting Hall of Fame.

Sonny could tell a story in a way that would make you laugh so hard your sides would hurt.

Shooting stories were numerous and including a retelling of the events of the last live pigeon shoot at the Boise Gun Club (and what caused it to be the last). Hunting stories reminded us of the fabulous duck and pheasant hunting in the treasure valley in “the good old days” and stories from his days as a police detective gave us a (sometimes hair-raising) look at events and history from the rough and tumble times of an earlier Boise.

If you were lucky enough to ride to a shoot with Sonny (and his brother in law John Buckmaster), you didn’t mind the drive no matter how far, because you were entertained non-stop both going and coming back. It was often so much fun you didn’t want the trip to end. You didn’t need (or want) outside entertainment because Sonny could provide enough all by himself.

Sonny had great confidence in his shooting ability and he did not mind letting you know that (especially if you were in a shoot off with him). He was a perfect example of that classic statement, “It’s not bragging, if you can back it up” and Sonny usually did.

He served his country as on the greatest generations in World War II, he served his community and city, and he contributed and served his gun club. A life well spent.