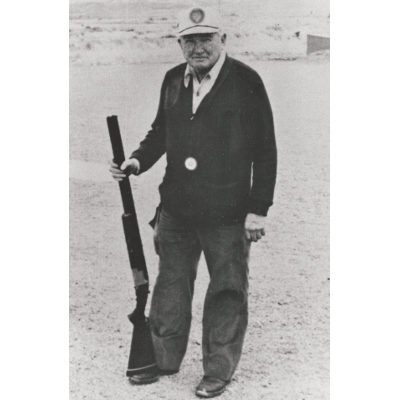 Glenn was born in 1909 near Idaho Falls. He and his wife raised two (2) boys and one (1) girl. In the 1950’s Glenn joined the Skyline Gun Club in Idaho Falls and started shooting trap. As a dedicated bird hunter he found that it paid off in his hunting also. At one stretch he went three straight years without missing a bird in the field.

He was a partner in the Pickett and Nelson Construction Company; a large road construction firm that did work throughout the West. When he retired in 1968, he was able to devote more time to the new sport he enjoyed so much.

Glenn is a life member of the Skyline Gun Club and he served a President for six years. During that time, he found that traps needed to be cared for and he realized that a shoot is only going to be as good as the traps, and when they are bad, the shoot will be bad. With no one around who knew what to do, he drove in on his own and learned what he could, and has shared his knowledge willing since then.

In the 1960’s, he began working on traps in Nampa and Boise. A set of T-handled Allen Wrenches were give to him by the Boise Gun Club for his volunteer trap repairing. They also gave him a nickname of “The Fix-It Man.” He also began fixing traps in Twin Falls, Burley, Pocatello, Blackfoot, Sun Valley, Idaho Falls, and Jackson Hole. As he traveled and shot at the different clubs, his fame for fixing trpas went with him. He always offered his services for repairing and adjusting traps as needed by the clubs. Soon, club directors looked forward to his arrival when they knew he would attend their shoot. Traps always need repairs. He also fixed traps at hom and his basement was setup with test stand and he maintained an ample inventory of spare parts to support this endeavor.

After his retirement, Glenn started shooting in the warmth of the Arizona sun. There he fixed traps at Beeline, then Casa Grande, and Red Mountain. He has also fixed traps at Lander and Casper in Wyoming, Providence, Utah, and Cottage Grove in Oregon. He also enjoyed shooting at all of these clubs.

Glenn was an Idaho State Trapshooting Association (ISTA) director in 1970 and for six years thereafter. Along with Skyline he holds life memberships at the Beeline, Tucson, and Casa Grande clubs. He is also an annual member at Pocatello and is a member of the Shoshoni Indians and the Rocky Mountain Oysters. And, yes, he took care of the traps during their shoots as well as competing with other members. He also sorted the empties so the clubs could sell them.

Clubs all over the west know Glenn. He shot his first hundred straight in California in 1970 and earned the 27 yard line at Jackson Hole in the early 70’s when he and Ray Stafford shot the same winning score. Other shooting accomplishments include matching the Idaho State veteran singles record at that time with 197 in 1985 and winning the veteran singles championship at the Grand Pacific in 1978 with a fine 199 score.

We thank Glenn for his many contributions to trapshooting over the past 40 years. We also admire his enthusiasm, dedication, and love for the sport and we welcome him as a member of the Hall of Fame.