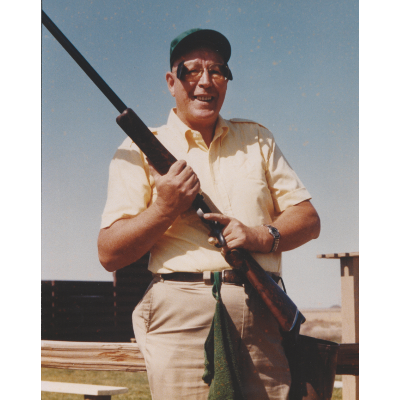 Al Wing was born in 1925 in Caldwell, Idaho and has lived there since. He married Bethel in 1950 and thy raised two daughters. Al worked for the Police Department from 1967 until his retirement 28 years later in 1985. During these years he attended the FBI academy twice and did a great deal of pistol shooting in team events and as an individual.

He was very devoted to his work and was a highly respected officer, often going above and beyond the call of duty with community projects and other activities. He was generous to those who needed a helping hand and believed that a handshake on something was a promise to keep.

Al began shooting trap in 1946, almost by accident. He was looking for a friend and found him at a gun club shooting clay birds. He thought “If those guys can do it, so can I.” He started shooting with an old model 31 Remington that did not fit, and often wen home with a bruised and bloody cheek and sore shoulder. For several years he shot at many of the little clubs in the area shooting meat shoots.

He joined the Izaak Walton Gun Club (Caldwell) in 1948 and has been a member of the Marsing Gun Club since 1980. Al served a a club director from 1950-1954 and from 1978-1990 and was president of the Caldwell Gun Club for four years. He helped add the new lighting system the now use, and assisted with putting in the last two traps and with remodeling the club.

His state championships include the 1983 Pacific International Trapshooting Association (PITA) H-O-A Championship and the 1984 ATA State Singles Championship as well as many Veteran titles.

Al has been a member of the Idaho Sate PITA All-Star team 13 times. as an open member or Veteran, and was also named to the National PITA All-Star team in 1991. He also tied for the singles championship at the Grand Pacific in 1990 and 200 straight.

In September of 1993, Al suffered a detached and torn retina at a shoot. After surgery and rehabilitation he was told he would never shoot again unless he switched over and became a right-handed shooter. Most people would have quit, and it was a tough and often discouraging process, bu Al stuck with it and learned to shoot well again as evidenced by a 200 straight at the Lewsiton Gun Club in 1996 and a 200 straight at the Boise Gun Club in 1997.

Al has attended, supported, and won at ATA and PITA shoots throughout the Northwest. There are very few people as dedicated to the sport of trapshooting. At the age of 72 he still talks about the things he would like to achieve personally, such as making it back to the 27 yard line again, and the changes he wants to see in the sport before he gives up his special hobby.

Congratulations Al on your selection for this honor, and thanks for your contributions and support of trapshooting. We welcome you as the newest member of the Idaho State Trapshooting Hall of Fame.