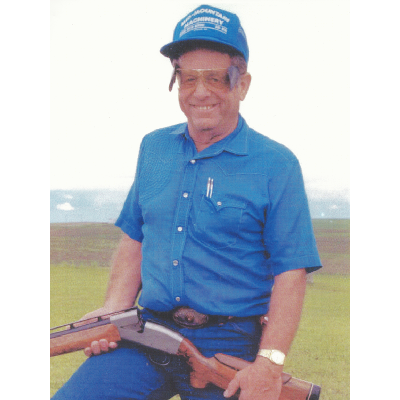 Alvin Connerley Joined the American Trapshooting Association (ATA) in 1971, and shot his first Idaho State Shoot at Sun Valley in 1972. Since then, he has shot in 17 states and has amassed an incredible number of targets. As of 2003, he had 140,000 doubles, 186,450 singles and reach 200,000 handicap targets over the winter in Arizona. Alvin has shot more registered ATA singles, doubles, and handicap than any shooter in the state of Idaho and is in the top 15 nationwide.

In 1977, he began to travel to Arizona to participate in the Winter Chain. He has shot the Winter Chain for 25 consecutive years an has only missed on Spring Grand since it began in 1970’s.

Alvin broke his first 100 straight in 1976 at the Lewiston Gun Club, and earned his way to the 27 yard line in 1978 at El Monte, California. In 2000, he broke 200 straight to win the Non-Resident Single’s Championship at the Arizona State Shoot at Tucson, Arizona. Alvin has won countless events, trophies, buckles and pins throughout his career a large and small clubs, participating in state, regional and local shoots. A few of Alvin’s notable wins include:

He has also won Championships at the Camas Prairie, Montana, Alaska, South Dakota, Iowa and Oregon.

Alvin has made many contributions to the sport thought the years.  He has served as a Board Member of the Lewiston Gun Club for many years, including tree terms as President.  Alvin provides expertise and assistance with many projects, and because of his building background and ability to mobilize resources, ha makes many tangible contributions such a helping remodel the Lewiston Gun Club, installing traps and upgrading the facility.  He also built the new trap house and poured the concrete sidewalks for the Culdesac Gun Club.  Because of his contributions at these clubs, he was awarded Life Memberships.  Years ago, he helped Sam an Sonia Stedman expand the trap line at the Casa Grande Trap Club in Arizona.  Currently he is actively involved in trying to help the Lewiston Gun Club identify solutions for relocation, and has been recently re-elected to their Board of Directors.  Additionally, he is on the Board of the Relocation Trust Fund at the Lewistion Gun Club. He is known for his willingness to pitch in to make shoots, shooting and clubs successful.  He has generated interest and enthusiasm for the sport, and has assisted many beginners to their shooting development. There are many Idaho and Washington trapshooters who now participate because Alvin introduced them to trapshooting.

Alvin was born in Twin Falls, Idaho in 1929.  Alvin married Luana Scholes, also from Twin Falls in 1947.  They began to travel early in their married life, because Alvin was a bridge contractor. They lived in multiple cities in the north west, until eventually they settled in Lewistion, Idaho, where Alvin started his own construction company.