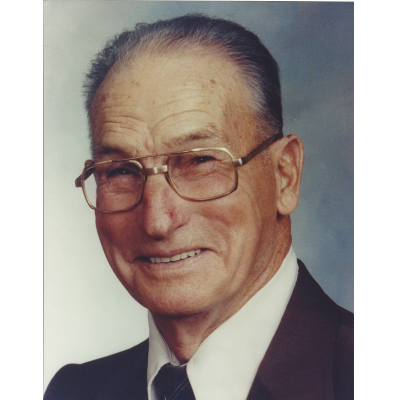 Bruce Finnell was born in Melrose, Idaho, on September 15, 1908 and was one of eight children. He married Glenella Bundy on December 10, 1937. They had three boys.

Bruce began his shooting career with a small B.B. gun ans then went on to a 22 rifle and shotgun. His first trap gun was a Smith. He wore out the Smith, then shot an Ithaca for years, and then a model 1100 Remington. Bruce did a lot of bird hunting before he even knew about trapshooting.

The Culdesac Gun Club had been organized about three years before Bruce became interested in joining and started to shoot trap. Bruce was on of the original members that helped organize the Camas Prairie Trap Association. They had their first big meeting at the old post office in Craigmont to set the ground rules. At that time there were seven original clubs. Now there are 19 clubs in Idaho and Washington.

He won over 150 trophies, his first being in Las Vegas. The trophies that meant the most to Bruce were a three-man team trophy at a Camas Prairie won with his two sons, Bob and Melvin, and a plaque that was given to him for his outstanding work with the Camas Prairie Association. He had also won four buckles with gold pieces, which he gave to the boys and Glenella.

At a shoot in LaGrande, Orgon, he shot a 99 in singles and cambe back to shoot 100 straight in the handicap that afternoon. It was the first 100 he ever shot. That is the one you always remember the most.

Bruce was the president of the Camas Prairie Trapshooting Association in 1956 when they were shooting over only four traps, and again in 1969.

Bruce farmed in Gifford, Culdesac area with his son, Bob. He is survived by his wife, two sons, four grandchildren, and two great-grandchildren.

Bruce Finnell was a fine shooter, friend, and family man. He was also willing to work to promote the sport of trapshooting and is one of those responsible for what we enjoy in shooting today.