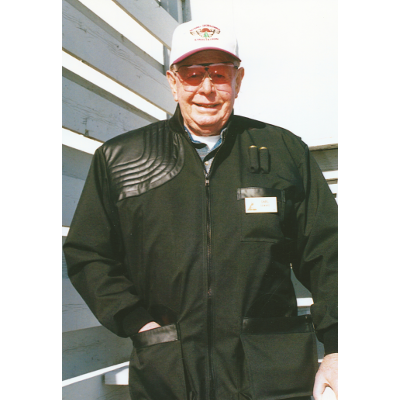 Carl Deward was born in Grass Valley, California in 1924 and was introduced to a shotgun at an early age by his father. He hunted quail in the Sierra foothills, and ducks in the Pacific Flyway.

Carl served as a Combat Air Crewman in the Navy in the Pacific Theater during Wold War II. Called into the Air Force after graduating from Utah State University with a degree in Forest Management in 1951. He served two years during the Korean conflict. He marred Barbara Fitzpatrick of Grass Valley in 1952, and have been happily married ever since.

Carl went to work for Potlatch Corporation after getting out of the Air Force in 1953, and retired as Logging Operations Manager in 1984 after working in verious forestry and logging positions over 31 years.

Carl started trapshooting at the old Lewsiton Gun Club, located on Snake River Avenue in 1961. He registered a 77 in the singles, and an 81 in the handicap events.

During his 38 years of active trapshooting he has won trophies at State Shoots in Idaho and Washington, the Inland Empire Handicap, and the Camas Prairie Handicap.

Over the years he has held various offices and chaired committees for the Lewiston Gun Club. Helped in moving the club from the old location on Snake River Avenue to the location at the Lewiston Airport. Served as secretary-treasurer of the Idaho Trapshooting Association (ISTA) during 1967 – 1968. He also has been a member of the Hi Yu Trapshooting Organization for 34 years and served as chief in 1979.