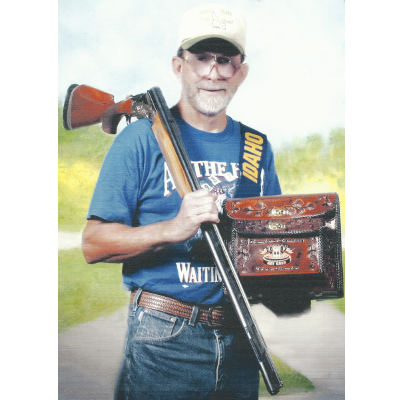 Charlie Woodruff shooting career began in 1965 on the Three Rivers trap team in Central New York State, where he began shooting registered targets in 1969. While shooting in New York he mad the All Star Second Team once and honorable mention twice.

He reached the 27 yard line three times with the last time being in the mid to late 1980’s and has remained there ever since. His extensive list of wins were earned at shoots ranging from New York, Pennsylvania, Massachusetts and Quebec before moving to Idaho in 1995. Russ Westerburg wrote this about Charlie, “Charlie hadn’t been in Idaho very long before trapshooters began to notice a little guy with thick glasses and a well used Browning shotgun along with a yellow Labrador named Bummer. The only thing that has changed in the last 12 years is that most trapshooters in the west know Charlie as a friend.”

Since coming to Idaho, Charlie has always been on the 27 yard line and he earned 11 honorary yards in 2007 alone. By any description including his own, Charlie is a man of modest means. Yet, he has never hesitated to share what he has with friends or strangers alike. An ever present personality at the Boise Gun Club, Charlie is quick to make a visitor from out of town feel welcome or coach a new shooter and is ever vigilant in watching for a politely correcting unsafe gun handling anywhere at the club. He is always on hand and ready to help out whenever needed.

The list of trophies earned by Charlie since coming to Idaho is staggering. Some of the highlights include taking three Singles Championships in one year (2003); Oregon ATA Out of State; Montana Out of State; and Idaho PITA State Champion. He won the Idaho State Singles Runner-up Championship in 1999, 2001 and 2002. Although he shot the winning score each time, Charlie lost all three to Stu Welton. He won three Singles Championships in the Idaho State PITA in 1998, 2003, and 2007. He has broken scores of 200×200 nine times, three perfect 100’s in doubles, and one 100 in handicap. He completed the Grand Slam in 2004 with that 100 at the Utah State Handicap Championship. Charlie has been on the Idaho State first or second teams 11 straight years. He was named to the All American Veterans first team in 2007 with the fourth highest all around average of 96.22 on 10,800 targets. At the Grand American he has represented Idaho three times in the Champion of Champions event winning th Veterans trophy in 2007 with 100 straight and a shoot-off win. He has also shoot the Champion of Champions event at the PITA Grand with a win in 1998, a tie in 2003 and just missing with a 99 om 2006. In 2007 he had 57 registered wins competing in five states.

Update: May 30, 2013
Charles “Charlie” J. Woodruff, 71, of Boise, Idaho, formerly of Phoenix, New York, passed away May 30, 2013 in Idaho. He was a member of the Class of 1960 at Phoenix High School and after school, served his Country in the U.S. Marine Corps (Semper Fi). Charlie worked at his trade as a sprinkler fitter in New York until he moved to Idaho in 1995 and worked there until his retirement in 2001. After retiring, he pursued his two passions of hunting and trap shooting. Charlie was “very good” at both, being named numerous times to the State Trap Shooting Teams in New York and Idaho. He was selected to the U.S. All American Trap Team (Veteran) several years and was elected to the Idaho Trap Shooting Hall of Fame. He will be greatly missed. Charlie was predeceased by his mother, Dorothy; his father, Zeke; and his sister, Shiela Woodruff Corey. He is survived by his brother-in-law, John Corey; his niece, Heather Corey; and nephew, Scott Corey.