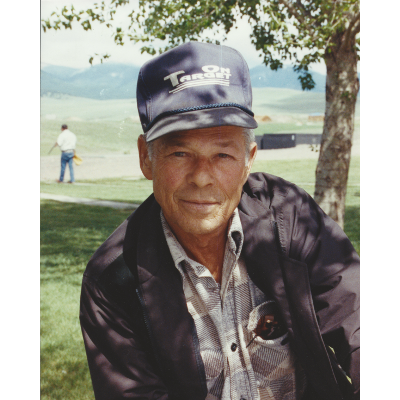 Dale W. Ball began his trapshooting career in about 1954 and was making a name for himself by the early 1960’s. Known for being one of the smoothest shooters in the Northwest, Dale’s first major win came in 1960 when he claimed the High All Around and High Overall Championships a the Idaho State Shoot. He won trophies in Idaho Sate shoots including the Doubles Championship and High All Around Championship in 1964. He also won several class titles in singles and doubles. Dale took third place in the 1966 Grand American Singles Class Championships with a 200 straight in Class AA. He also broke 200 straight in the Grand American Clay Target Championship. These wins led to an All American 1967 Honorable Mention selection for Dale. He was the Montana State open AA Class Champion in 1974 also with a 200 straight.

Over the years Dale posted four major wins a Washington Sate shoots. He captured the preliminary handicap in 1962, High Overall in 1966, the Class A singles in 1972 and garnered another High Overall Championship in 1972.

A very friendly and good-natured man, Dale was always quick to lend a hand to anyone, young or old, who were looking for help with their shooting. He had a terrific sense of humor, and just being in his presence would put a grin on your face.

Dale spent most of his working life in the lumber industry. He was also a very good athlete who excelled in football, basketball and baseball in high school. Sadly Dale passed awa at his home in Kamiah, Idaho on August 27, 1994. of a heart attack.