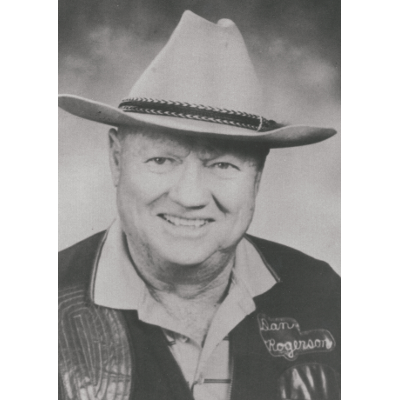 Dan Rogerson began shooting a turkey shoots in 1945 and started registering targets in 1946. From then on he never missed an Idaho ATA state shoot. He served on the Idaho State Trapshooting Association (ISTA) board of directors for fifteen years, holding every office during that time.

Dan Rogerson became a charter member of the Shoshone Indians trapshooting organization in 1948, served as high chief, and was a member for 39 years.

Dan Rogerson was a life member for the Amateur Trapshooting Association (ATA) and the Pacific International Trapshooting Association (PITA). Danny was the Idaho PITA state singles and state handicap champion in 1959 and has won the veteran singles cahmpionship at the PITA state shoot for the last three years. He won the veteran singles championship at the ATA stated shoot in 1984 and 1986 ans was the veteran member of the 1984 and 1986 ATA state All-Star teams.

Dan Rogerson recorded many trapshooting accomplishments from wins at the Grand Pacific to the Spring Grand and all along the winter chain shoots.

Dan Rogerson was a guiding force for the Twin Falls Gun Club for many years and was one of the members responsible for its growth and development.

Dan Rogerson was also well known throughout the Western states because of the target and shooting supply business he operated. Many gun clubs and individual shooters were helped a great deal over the years by Danny’s special efforts that went beyond a business interest and reflected his love of trapshooting and especially the people involved in it.