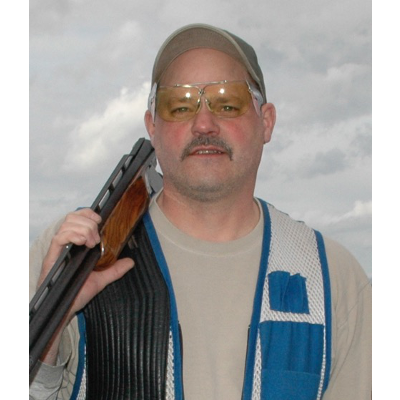 Darin Williams began shooting registered targets in 1972 and attended his first state shoot at Sun Valley Gun Club. His wins are too numerous to list in this space but included some very impressive titles.

In 1979 he was named to the Junior All American First Team; he was the first Idaho shooter to attain the Grand Slam. He has tied for the Clay Target Championship one time with a 200 straight. He also broke 100 straight in the Doubles Championship at the Grand American.

At the state level Darin has taken home the State Handicap Championship and the Doubles Championship one time each, and has lost track of the High Overall and High All Around Championships – not to mention class, yardage and other non championship state trophies. He has led the state high average leaders for many years in all three disciplines. He has also been a member of the Camas Prairie All Star Team at least twice.

To date (2009) Darin has registered 66,450 singles, 57,050 handicap, and 42,850 doubles targets. He is also a life member of the Amateur Trapshooting Association (ATA) and the National Rifle Association (NRA). Darin has shot at most gun clubs in the Northwest and has always been a force to be reckoned with, likewise his sons are quickly becoming two of the best young shooters to come along in quite a while.

Some national records deserve mention. Darin’s father Floyd, Darin and son Grant are a three generation team that have each broke 100×100 double. An All American team brother/son record was accomplished with Darin, brother Beaver, nephew Derek, and son Grant all made the All American Team.

A tight knit family has always been part of the Williams tradition and you will see Floyd, Darin, Grant and Garrett together at many shoots, joined by Beaver and Derek to make a formidable squad, indeed.

Darin was born in 1960 in Kellogg, Idaho. He married Beth Baumgardner in 1991. He works for the Central Shoshone County Water District in Kellogg. The family resides in Pinehurst with their two labs Gus and Griz.

If you get a chance to watch Darin shoot, do so. What you will see is a study in relaxed but calm posture and clear focus on the target. Darin’s classic shooting style did not fall far from the tree. Look at Derek, Grant and Garrett, they mirror images of Darin. There is no guessing as to who taught them to shoot.

A quiet man who has always won, and lost, with grace. A friend to all and a much deserved recipient of this honor.