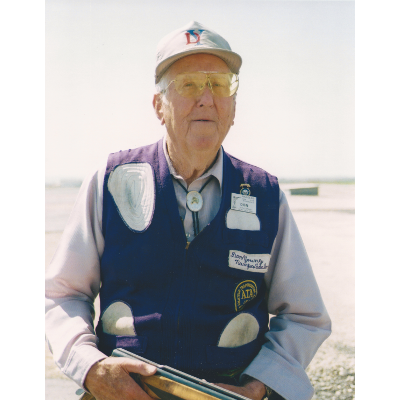 NOTE:The following was written by Don’s son Steve who tragically passed away in April, 2005. A wonderful tribute to his father when Steve found out Don was going to go into the Hall of Fame.

Don Young was first introduced to trapshooting by his boss Reed Leichty, who was an avid trapshooter himself. It was not long before Don was hooked on the sport and began shooting in registered shoots. I can remember, as young kid, spending lots of time with Don a the old Boise Gun Club on Amity Road.

To become really involved in this sport requires family support. His wife Henrietta was his greatest supporter of all. I remember her telling me that Don told her he would like to go to a shoot in Reno, Nevada. They really could not afford to go and it was going to take their entire savings to attend this shoot. Henrietta said, “Let’s go!” Don shot a Browning over and under. It was held together with tape and he cut the head off the lathing nail and stuck it in the rib for a sight. So off to Reno they went with their total savings account riding on this shoot. Not to my surprise nor to Henrietta’s, he cam home a winner. He shot three 99’s in the handicap events. Don wa an ATA and PITA Delegate at this time.

In 1963 Don attend a shoot in Twin Falls. He came home with a gun, which he gave me. I took up the sport and shoot with him as a Sub-Junior and Junior.

In 1998 Don’s three sons asked their father to shoot in a league at the Boise Gun Club. don was all smiles. He was going to shoot again and what better than to shoot with his three sons. They had a great time. They did no win anything but actually they were more concerned with beating each other than anyone else!

He has won many trophies and I believe his last count on belts buckles alon is near 50. My calculation is he has shot nearly 150,000 registered targets. During this time he served as President and was a Director of the Boise Gun Club. He is a Life Member of both the ATA and the PITA, as well as a live member of the Boise Gun Club and the Caldwell Gun Club.

Don has shown his support and generosity to the sport beyond the call of duty. He never misses a local shoot. He ahs sponsored trophies, cash prizes and advertisements in programs. He built a trap shop at the Boise Gun Club, donated most recently to some of the Boise Gun Club’s improvements and donated the pouring of concrete for the Caldwell Gun Club. He has been a true supporter of the sport. He has furnished shells for many young shooters.

People shoot for lots of reasons. Some shoot for money and championships, some for averages and some just for fun. Don shoots because of his love of trapshooting and the people involved in it.

Shooters are classified at shoots by classes and yards and by specialty. Don falls into one of these classifications by I believe he is in class all by himself. He is truly an amazing person. I am proud to have him as my father, my mentor and my best friend.

Update: June 2012
Donald Robert Young 1926 – 2012 Donald Robert Young, 85, of Kuna, passed away peacefully Thursday, June 21, 2012. Don was born September 11, 1926, to Chester C. and Lottie Mae Young. He was a life-long resident of Kuna, Idaho, leaving only to serve in the United States Army during World War II. He was a graduate of Kuna High School and attended Boise Junior College. On June 6, 1949, he married Henrietta Perraut. The couple went on to have four children and celebrate 58 years of marriage before Henrietta’s passing in 2007. In 1957, Don – a lath and plasterer by trade – started his own business. With his wife and sons by his side, his company, Don Young Construction & Supply, Inc., built homes, churches, schools, banks, and other projects across the state until 2005. He had a reputation for being a tough but honest businessman. Don was an avid athlete, participating in baseball, bowling, golf, and trapshooting. He gave up the opportunity to play professionally for the Chicago Cubs in order to start a family. Sports played an important part in his life, and he enjoyed watching his children and grandchildren in sport, sponsoring bowling teams, breeding and owning race horses, and trapshooting at the Boise and Caldwell Gun Clubs, where he was a life member. He loved watching Atlanta Braves games on television, and if he dozed off during the game, he would quickly wake up if anyone attempted to change the channel. In addition to sports, Don enjoyed serving his community. He was a life member of the Nampa Elks, Good Sams, and the Kuna Lions Club, serving as its President in 1975. Don is survived by his sons, Michael Young and Don Neil “PeeWee” Young, both of Boise, and his daughter, Loretta Young-Sidener of Meridian. He is also survived by four grandchildren and their spouses: Stephanie Young-Birkle and her husband, John Birkle, of Woodland, California; Jennifer Young and her husband, Travis Pauley, of Kuna; Nicholas Young and his wife, Jackie Young, of Kuna; and Breanne Young of Meridian. He is survived by six great-grandchildren: Grant and Lauren Birkle, Emma and Hannah Young, Katelyn and Cash Pauley. Don was preceded in death by his wife Henrietta and his oldest son, Steven.