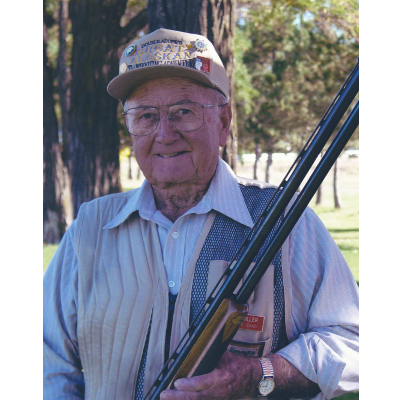 Duane Miller started shooting trap at the Nezperce, Idaho Gun Club in 1954. He follows a long chain of family shooters that starts with his Granddad, Norton B. Miller, and includes his dad Claude M. Miller, several uncles and cousins.

One of the annual shoots Duane’s most looks forward to is the Nezperce Fathers’s Day shoot. Over the years, Duane, his Dad and three of this boys formed a Miller Squad. When his Dad was no longer able to shoot, Duane’s sons, and eventually, his grandsons helped make up the Miller Squad. The family enjoys shootings together any chance they get.

Duane help build the Nezperce Gun Club and served as President in 1959 and 1960. He also helped with cashiering during some of the early Father’s Day Shoots, which began in 1960. Duane has served on the Idaho State Trapshooting Board of Directors for several years, the Camas Prairie Board of Directors, as well as the Idaho State Hall of Fame Committee. He has served as President or Chairman of each of these organizations.

Although several doctors have told Duane he would never be a good trapshooter because of his eyesight, he continued to shoot and stacked up several 100 straights including a patch from Remington/Peters for 214 straight. He has won many trophies and awards over the years, among which were the Idaho State Veteran Champion in 1993 and the Idaho State Senior Veteran Champion in 1996. He has also taken in many Camas Prairie, Idaho State and Inland Empire shoots along with the local small town shoots throughout the Northwest. Duane was able to attend the Grand American at Vandalia, Ohio when his friend Dan McKenzie was president in 1994. In 1999, he toured Alaska with Mike McNeely as Wagon Master and other shooters who took in shoots along the way.

For 24 years, he and his wife Geraldine (better known as Geri) have traveled to the winter chain in Arizona. He has collected pins and patches from all the clubs he has been to over the years. The trophies and accomplishments Duane has garnered included silver coins, belt buckles, silver service, gold coins, pictures, plaques, crystal and many more, too numerous to mention.

One of Duane’s proudest accomplishments was shooting his 100,000th target at the Father’s Day shoot at Nezperce in June 1997 with his four sons, grandsons, and many friends there to help make sure he broke that 100,000th target.

Duane was born March 13, 1925 in Moscow, Idaho to Claude M. and Dorthy Cole Miller and has made his home at Nezperce. He has lived there all his life except for his tour of duty in the Navy during World War II.