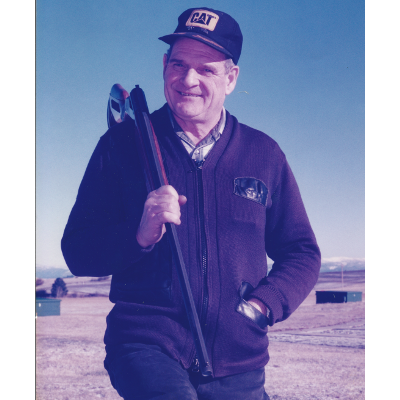 Hal was born in Cottonwood, Idaho in 1939, lived in Whitebird, Idaho for 35 years, and in Grangeville, Idaho since 1975. He worked his way from toy guns through rifles and pistols before taking up shotguns. He began to shoot trap to practice for Chukars in 1965 and became hooked.

Since then he has not missed a Camas Prairie shoot and has attended all of the Armature Trapshooting Association (ATA) state shoots from 1966 on. Hal has been a logger most of his working life and has registered almost 170,000 total ATA targets during his shooting career which has taken him from Missoula, Montana to Boise, Idaho and even one trip to the Grand American.

Hal’s shooting accomplishments include shooting from 27 yards since 1972, winning every major event at the Camas Prairie, breaking the only 100 straight ever recorded at the old Pullman Gun Club, ten Idaho ATA state campionships (three High All Around (HAA), four High Over All (HOA), one singles, and two doubles), eleven state runner-up awards, eight Camas Prairie championships, and several wins at the Inland Empire.

Hal has accomplished a great deal and also gotten a lot back from trapshooting. As he put “I went from a person who knew only about 50 people to having friends everywhere.”

We salute him for his accomplishments and contributions to the sport of trapshooting over the last 33 years, and we welcome him as a member of the Idaho Trapshooting Hall of Fame.