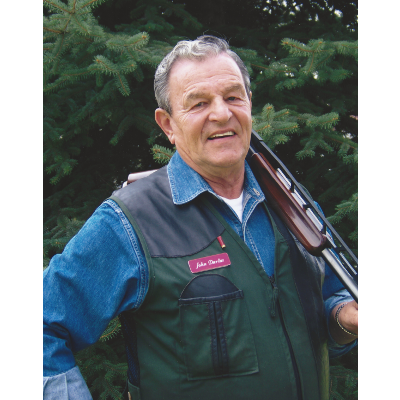 John Darlas, a native of Idaho, was introduced to trapshooting as a member of the Rathdum Lions Club in the early 1960’s. The club maintained two Clin-Pull traps and drew shooters from all around the Northwest to their turkey shoots. He also became an NRA Safety Instructor at that time.

John Darlas desire to shoot registered targets soon took him to Spokane and the new Coeur d’Alene Skeet and Trap Club. Coeur d’Alene Skeet and Trap Club threw it’s first Amateur Trapshooting Association (ATA) targets in 1966. It was common for the family to spend the day or weekend at a gun club in the Northwest. Over the years John and wife Nancy traveled extensively throughout Idaho, Washington, Montana, Canada, and Oregon. They took in one Spring Grand in Phoenix in 1977 while visiting their daughter Julie. He is a life member of the ATA.

The trophy list for John is huge. In looking over his record one will find well over 150 trophies he earned between 1976 and last year. The list includes 27 trophies won at Idaho State shoots alone with various out of state and other clubs too many to detail here. As of the completion of the 2007 Target year John head registered 129,500 singles, 129,850 handicap and 66,350 doubles targets.

John Darlas passion for the outdoors has inspired him in hobbies as well as his career. He served in the US Army from 1954 to 1956 as a field artillery surveyor in Korea. John started Darlas Logging in 1974, employing sons, Steve and Stanley and completed in logging events with them and his daughter Kathi for years.

John Darlas and his wife Nancy of 50 years have been honored for their volunteerism by various people and clubs along their journey, and have acquired a circle of life long friends. Grandson Jake is now shooting registered targets and is John’s sidekick at many shoots.

His children wrote in their nomination from these words: “He loves the challenge, He loves the people, He loves sharing his wisdom and encouragement with fellow sport shooters. He is a family man first, a trap shooter second. He taught his wife, all four of his children, sons-in-laws, all five grandchildren and numerous extended family members to shoot trap. He especially enjoys encouraging new shooters of all ages in technique and sportsmanship. He ahs never met a stranger. He will help run the paperwork, set traps, and shovel snow, man the barbecue, sell advertising, find the trophies and even help with water and plumbing problems, all for the sake of assuring any trap shooting even to be an enjoyable family event to all in attendance. We are proud of our father. He is the finest definition of a man of quality. He has always been there for so many people in so many ways, which includes Great Grandson, Connor.”

We couldn’t have said it better.