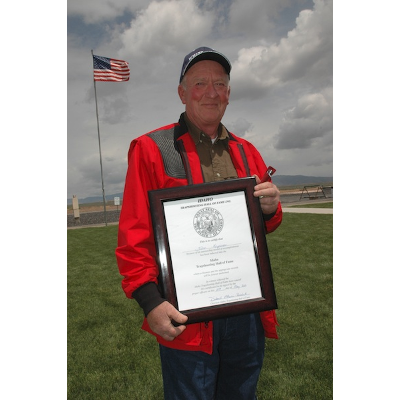 John Keppinger was first introduced to trapshooting in 1956 at the age of ten years old boy by his father. The Indian Valley Gun Club was their trapshooting home. He was hooked on the sport and started shooting registered birds in the late 1960’s. During his younger years John worked the farm his grandfather homesteaded in 1903. The farm produced hay, wheat, and cattle. During the continuous improvements of the farm, John built 40 wildlife ponds and planted over 20,000 trees for the area’s wildlife. John sold the farm in 1995 and moved to Ontario, Oregon to become a manager for Heinz Foods in the potato storage services division. He and his wife Helen moved to Meridian in 2009 to be closer to their grandchildren. He and Helen just celebrated their 32nd wedding anniversary. What makes the year 2011 so special was they won husband and wife singles title at the Camas Prairie shoot in Walla Wall Washington.

While John has won many trophies in his shooting career, here are his Armature Trapshooting Association (ATA) highlights:

During John’s years of shooting he has resisted over 80 one hundred straights with the first 100 shot at Lewistion, Idaho in 1971. Due to an accident on this farm, there were many years John was unable to shoot any trap. John’s persistence and dedication to trapshooting kept him going. Trying lighter loads, low recoiling guns, and equipment to make shooting easier, he has found a way to remain competitive. His wife Helen is a huge supporter of his and you will find them traveling together to trap shoots throughout the western states.

John Keppinger has a granddaughter, Shelby Burr, who shoots regularly at registered events. John not only supports her shooting but, being the President of the Boise Gun Club, he spends a great deal of ttime and energy constantly improving the club for all the shooters whether practice, league, or registered shoots.

John Keppinger legacy will surely be the love of trapshooting and the people involved. You can always ask him for help or suggestions to improve the club or your shooting. He is always available. Helen and John have shot at over 35 gun clubs and have met and become friends with shooters throughout the Pacific Northeast. Say hello to John. He is a huge asset to our sport whether shooting or helping the club.