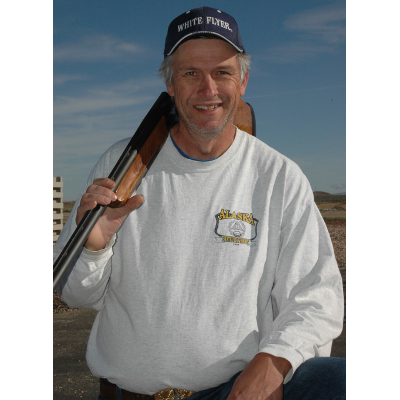 Mike Miller began his journey in trapshooting when he was but six or seven year old. His father ran the old Nampa gun club in the early 60s and Mike began following him around the club in the late 60’s. Mike has been a member since that time.

1974 was the first year he shot trap but was busy playing basketball and baseball for six years before beginning to shoot league with his father and uncle in 1983 and has shot most league shoots at Caldwell over the next 25 years. He began registered shooting in 1983 taking in his first ATA and PITA state shoots. He has shot every target at each ATA state shoot since and has only missed two or three PITA state shoots.

Mike has served on the Caldwell Gun Club Board of Directors as President in 1988 and also as a Director from 1985 into the early 90’s and again in 1999 and 2000. During his tenure new lights, RV parking and new walk ways were installed. He also began the first perpetual handicap purses along with his wife Cheryl. By this time he thought his address was the Caldwell Gun Club!
The goal reaching the 27 yard line was made 1987 and he has shot there ever since, Mike also lays claim to being the first person to break 100×100 handicap at Mountain Home. Mike completed his grand slam in 2010 and has shot well over 75,000 ATA and 50,000 PITA targets.

Major achievements in his career include being a member of the ATA state team four times and the PITA state team five times. He won the ATA State Handicap Championship twice, in 1985 and 1999. He was runner-up in 2012. A 200×200 score in the 2010 ATA state shoot resulted in the runner-up trophy. He took home the High All Around runner-up trophy in 2012, and has several class and High Overall wins. In the PITA he was the Handicap Champion in 1988 and runner-up in 1994, State Doubles Champion in 1992 and 2010 and runner-up in 1995. High Overall in 2008 and 2010, High All Around in 2010. He has also won many many trophies at the Camas Prairie and Western Grand shoots over the years including High Overall titles and too many state shoot class and yardage wins to remember.

Mike has been married to Cheryl for 25 years and the couple are usually seen together at most shoots with Cheryl being an excellent shooter in her own right.