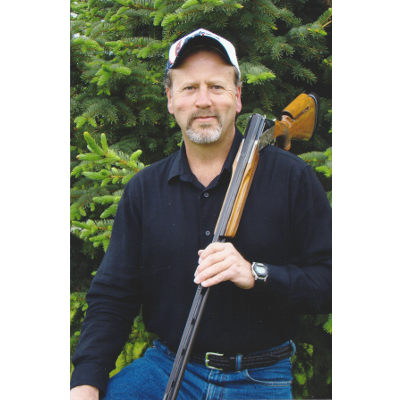 Mike began shooting trap in 1991 at Pocatello Gun Club after being invited out to the club to shoot a few practice rounds. Mike was hooked by the time he left the first post. Mike did not shoot very much when he originally started, but did register targets for a few years with the goal of reaching the 27 yard line. After reaching this goal and starting a family, Mike did not shoot at all for about six years. Mike began shooting seriously in 2000, traveling most weekends with his dad and with friends. Mike has many great shooting memories and it is difficult to point to favorites. From strictly a shooting perspective, a few of the high lights he remembers are: every state title, his first 100 straight from the 27 (2006 Idaho State shoot); going 300×300 in singles, handicap and doubles at Spanish Fork (2006 Utah State shot); going 400×400 at Pocatello (100 singles, 100 handicap, 100 pair doubles, 2007 June shoot); shooting off for the Doubles Championship the last year the Grand American was held at Vandalia; and making the All American team a couple of times.

When Mike first started, it was all about the shooting and the scores; as time went on, it became more about the time with friends and family. The evening barbecues, card games and the friends made are the memories that are and will remain the best memories he has of the sport. Mike can’t imagine another sport with the quality of people and the level sportsmanship that he has had the pleasure to enjoy.

Mike is currently taking a break from shooting to spend more time with my family, but look forward to blowing the cobwebs out of my gun, and hopefully from between my ears, in the near future.

Mike also served on the Idaho State Board of Directors for six years. He has traveled all over the west shooting tournaments on a regular basis and have promoted shooting in Idaho everywhere he has gone. Mike has invited many out of state shooters to travel to shoot in Idaho and many of them have come.

Mike was born in Idaho Falls and was raised in Shelly, Idaho with his three sisters. He enjoy’s hunting, fishing, trapshooting and golf. He went to college in Pocatello and have worked at the Idaho National Laboratory since graduating. He has one son and one daughter and I have been married to my wife Peggy for 17 years. Peggy has been a great supporter of his shooting, and he would have accomplished very little withou there support