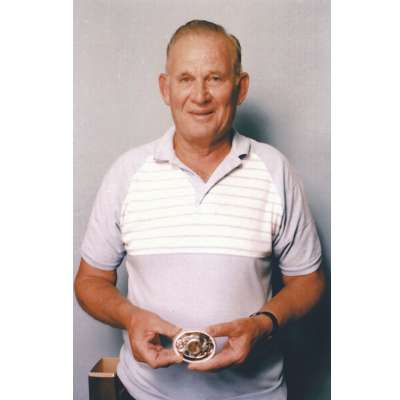 Rudolf (Rudy) Milsted was born in Florida in 1931 and after serving 23 years in the Air Force, he settled in Pocatello, Idaho in 1972. He began shooting in 1955 while stationed in California and has been shooting ever since.

After moving to Pocatello, Rudy became active in the Pocatello Trap Club and over the following years began to have a large impact on not only the local club but shooting in the state of Idaho in general. He played a major role in building the August Gun Shoot into one of the major shoots in the West, and was instrumental in expansion and improvement of the Pocatello Trap Club, and championed the idea of having the Idaho ATA state shoot rotate through tree sites (East, West, and North) instead of just two.

As a member of the Pocatello Chamber of Commerce and while also serving on the tourism committee, Rudy devoted a great deal of time and effort to convincing the Shoshone Indians to make the move from Jackson Hole, Wyoming to Idaho and making the Pocatello Trap Club their current home base.

Rudy served as President of the Pocatello Trap Club from 1993 – 2000 and under his direction the club put in four new trap houses, bought five new automatic traps, purchased two railroad boxcars for storage, and added a large covered patio, and doubled the size of the R.V. parking area. During these years he spend countless hours taking care of the books and watching income and expanses to make these improvements possible. During one building and expansion project alone during this time, Rudy made a 50 mile round trip each day and spend 28 days ensuring that things were completed on time.

The late George Parker wrote a tribute to Rudy on December 18, 2001. George said, “I have been a member on the board of directors of the Pocatello Trap Club for thirty-three (33) years; and no one has ever accomplished as much as Rudy has over the past eleven (11) years.”

Along with all his hard work and contributions, Rudy was also a fine shooter. He was named to the Idaho State ATA All-Star team six times (1993, 1994, 1996, 1997, 2000, 2001). He earned his ATA AA-27-AA pin in 1994 and had wins in singles, doubles, handicap, and High Overall (HOA) categories at shoots all over the West including the Western Grand, the Golden West Grand, the Western Zone, the Utah ATA state shoot, the Idaho ATA State Shoot, and the Pacific International Trapshooting Association (PITA) state shoots.

Probably one of Rudy’s biggest shooting accomplishments took place at the PITA Grand Pacific in Reno, Nevada in 1994. Rudy was on his way back to Idaho after a trip to California when he stopped in at the Sage Hill Gun Club in time to shoot the last event – The Grand Pacific handicap. He shot a 99 and then defeated Gary Fogelson, Wallace Merkley, and Mike Wirta in a four-way shoot-off for the championship. Rudy was featured on the cover of the November “On Target” magazine for this win.

Rudy could be a hard taskmaster whine it came to how things should be done, but it was only because he wanted things to be as perfect as possible for the shooters and for “his club”. His tireless efforts have resulted in a wonderful shooting facility at the Pacatello Trap Club and many constructive changes in trapshooting for the state of Idaho.

The only regret Rudy had about his shooting career was that he did not have a 100 straight from the 27 yard line. Once at the gun shoot he missed one of his last 10 handicap targets for a 99 and a squad member told him not to worry about it because he was shooting so well he would almost certainly get his 100 soon. However it did not work out that way and Rudy developed a serious health problems ans passed away the next year.

For his many accomplishments and contributions to the sport of trapshooting, we are proud to honor Rudy Milsted as teh 2003 inductee into the Idaho Trapshooting Hall of Fame.