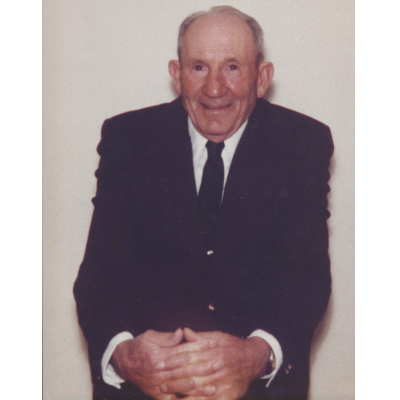 Willard Smith, Trapshooter and farmer, was born in Tennessee in 1904. He moved to Idaho in 1917, buying a farm in Craigmont, Idaho, in 1926 where he made his home for life.

Willard Smith is generally regarded as the founder and originator of the Camas Prairie Trapshooting Association (CPTA).

He started out shooting with a Winchester 22 then bought an old Marlin shotgun for bird hunting. He farmed with horses and cut his grain with binders, shocked the grain and the rouse would come into the fields. This would make for really good bird shooting.

He started shooting trap with a hand thrower and a Model 12 Winchester bought for $120. His son still has that fist trap gun. He was shooting fairly well, so he joined the Winchester Gun Club January 26, 1941, as a member number 147. A few of the shooters would take in the Spokane Review Shoot. If was after one of these shoots that the idea came up for starting a shoot of that kind so they would not have to drive so far.

About 18 months later the Camas Prairie Trap Association was formed with seven original clubs. Those clubs were: Creigmont, Grangeveille, Kamiah, Orofino, Winchester, Cottonwood, and Nez Perce. The Camas Prairie Association was officially formed in 1954. The first two years of the Camas Prairie the targets were not registered and the biggest trouble they had wa not having enough guns. They had only about 25 trap guns and the res of the shooters had to use field guns. Shooters shot targets that were thrown by a hand pull trap. Even though it was not as sophisticated as today, the shoot was a success an there was a lot of enthusiasm. The first two shoots were at Orofino and targets were thrown in a gravel pit. The third year they moved to Winchester and the targets were registered. In 1960 Riggins was admitted, then Troy-Deary, and thirty-two years later there are a total of 19 clubs forming the Camas Prairie. They had to move to Lewiston in 1965 to accommodate all the shooters. The shoot is thrown over 18 traps with 100 squads for three days. Shooters shoot from daylight to well int the dark. It is now the largest shoot in the state of Idaho.

Willard’s greatest win in trap shooting was the Guy Cheisman Trophy, which was a pin and a trophy for a hundred straight in singles at the Hi Yu Indian Shoot. In 1954 he won the High Over All at the Camas Prairie and had also won many singles, doubles, and handicap trophies throughout the years. Willard Smith did not have an ATA number! But was in the records at the Amateur Trapshooting Association (ATA) office in Vandilia, Ohio. After doing some research Willard’s ATA number is 4.

Willard Smith died at the age of 85 in 1989. He had three sons and two daughters. One of his sons, Bob, is following in his footsteps and trapshooting. Those who knew him considered Willard Smith to be a fine friend, father, husband, and trapshooter.