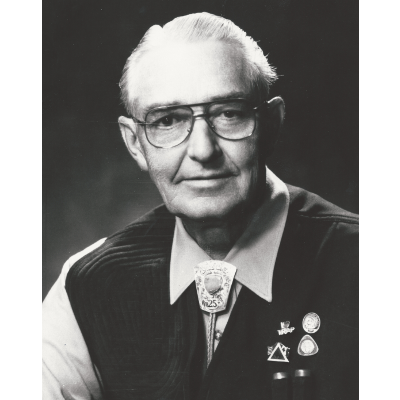 X.E. “Buster” Durant has been a familiar sight for years at the handicap table a shoots all over the country. He is a person who has donated a great deal of time and effort to the improvement of trapshooting.

He has been a member of the Western Zone Central Handicap Committee since 1975 and chairman since 1985.

X.E. “Buster” Durant continued to enjoy Trapshooting and work in it’s behalf for 25 years after his induction into the Idaho Hall of Fame. In 1989 he was inducted into the ATA Hall of Fame. From 1962 to 2006 he made 44 consecutive trip’s to the Grand American.

He won many trophies over his shooting career including wins from the Grand American, Spring Grand, Western Zone, Idaho State, Golden West Grand, and the Camas Prairie. He shot over 300,000 ATA Registered targets during his lifetime beginning with a trap range he set up in Pierce in 1948. Over the years he served as president of both the Pierce and Orofino gun clubs.

X.E. “Buster” Durant served in Europe during World War Two as a member of the Army and was a Pierce City official for nearly 25 years, serving on the City Council and as Mayor. He was also elected Clearwater County Commissioner and served in that capacity for 15 years before retiring and moving to Lewistion in 1993.

After graduating from the University of Idaho in 1947, X.E. “Buster” Durant bought out his parents store in Pierce and he and his wife Mary Ellen operated Durant’s General Merchandise and Durant’s Grocery for many years – selling the store in 1978.

X.E. “Buster” Durant contributed many ideas for improvements fro the sport he loved over the years, and we continue to enjoy the fruites of his labor. He loved live and enjoyed the many friends he had all over the United States. X.E. “Buster” Durant passed awa at the age of 90 in August 2012.