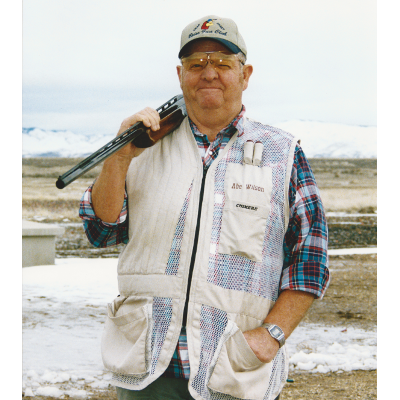 Abe was born in 1936 in Nampa, Idaho. His father died in 1947 and his mother is 94 years old. He has three brothers and one sister. After a long career in the Idaho Air National Guard, Abe retired and has been maintenance director for the Boise Gun Club for the last decade.

Abe was introduced to trapshooting by friends at work and soon acquired a love for the sport and the competition and challenges it proved. Working with Joe Kersting a the Boise Gun Club, he began to help repairing and maintaining trap machines and other equipment.

After starting to shoot in 1984, Abe paied his dues and eventually worked his way to the 27 yard line and AA class in singles. He had many wins along the way ranging from club championships to state shoot and Grand Pacific wings. A partial list of shooting accomplishments include:

Even though Abe loves to shoot, he has very often over the years, sacrificed his own personal success to make sure that the shoots run well for the clubs and other shooters. Abe has many times passed up the chance to even shoot events because there is too much work to be done on traps and other problems that need attention during a trapshoot.

He has helped run shoots while maintaining thr traps at the same time for shoots ranging from small to ATA and PITA state shoots and Zone shoots. Thi is a large task and he has helped at least four clubs. They include Boise Gun Club, Caldwell Gun Club, Twin Falls Gun Club, and Lewistion Gun Club.

For at least a dozen other clubs, Abe has helped repair traps and solve trap related problems as well as maintaining all of the trps during many of the shoots thrown by these clubs: Ontario, Wilder, Marsing, Melba, Indian Valley, Council, Mountain Home, Jackson Hole, Wood River, LaGrande, Baker City and Blaine County.

Abe has provided help and assistance in many other ways ove rthe years to clubs and shooters and has greatly contributed to the success of trapshooting in Idaho over the past years.

Many people contribute to putting on trapshoots, but seldom does someone come along who has consistently done so much for shooting for so long a period of time as Abe Wilson