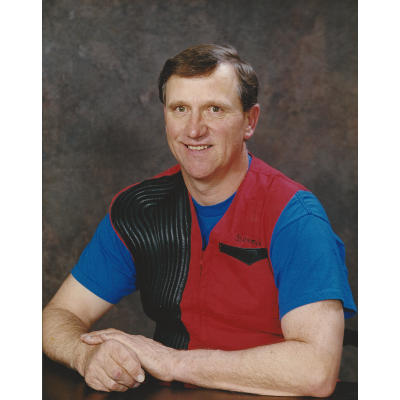 Bernie was born in Pocatello and lived there until 1967 when he moved to the Twin Falls area where he lived for many years. He was introduced to trapshooting by a friend at a sporting goods store. The first time Bernie shot he knew he liked it and remembers telling his wife that if he worked at it, he felt he could be good at shooting trap.

He started shooting trap consistently in 1969 and the first time he went out and shot he broke a 7 out of 25. An amazing accomplishment was that Bernie made the Idaho Amateur Trapshooting Association (ATA) All Star Team that same year.

By 1971 Bernie was a AA-27-AA shooter who couldn’t really afford to shoot much trap. He was a husband and a father first and was trying to provide for his family and also enjoyed trapshooting as much as he could. He would scrimp and save his money and recycle his reloading supplies by doing things such as reusing wads and picking up unbroken targets to use for practice. He had the philosophy that where there is a will, where is a way.

One year Bernie’s son was trying to help and surprise his dad by reloading for the upcoming traps shoots. By mistake he accidentally reloaded 2,000 rounds with dry dog food and , worst of all, he used up every single empty hull that Bernie had saved.

Bernie has fond memories of many shooters who he has been associated with in his early trapshooting career and contributes his success to friends such as Orn Diamond, Ben and Peggy Hurtig, Ray Hamby, Cecil Dodge, and Barbara, Ted, and Ed Renforo. These shooters encouraged Bernie by driving him to shoots, making special deals, and encouraging him with emotional and financial support that allowed Bernie the opportunity to shoot as much as he did.

He now lives in Hailey, Idaho with his wife Donna. They have four children – Tim, Terri, Tiffany, and Rick.

One of Bernie’s most impressive shooting accomplishments is the large number of major state championships he has won. He has fourteen ATA and seventeen Pacific International Trapshooting Association (PITA) Idaho state championships including eight singles, eight doubles, seven High-Over-All (HOA), seven High-All Around and one handicap championship. Looking at Bernie’s list, only the great J.O. Cotant comes to mind when you think of the number of Idaho State Championships won over a career.

Other highlights in Bernie’s shooting include being named to thirteen ATA and PITA Idaho State All Star teams along with an honorable mention on the 1973 ATA All-American Team, Runner Up in the Champion of Champions at the Grand amarican in 1975, Grand American Preliminary Doubles championship in 1975, Grand American doubles Championship class AA in 1978, being a member of the winning zone team in the Clay Target Championship in 1988, tieing for singles champion at the Golden West in 1979, breaking back-to-back 100’s from the 27 yard line at Sun Valley in 1978, and being on the second person in ATA History to have 200 straight from 27 yards, back-to-back 99’s from the 27 yard line at Bakersfield, California in 1978, and having the high handicap average for Idaho in 1969.

Bernie took a few years off from trapshooting but when he started again he picked up right where he had left off. He finished off his ATA “Grand Slam” by finally breaking the elusive 100 straight in doubles at the state shoot in Boise in 1998, and also won the Snake River Trapshooting Association (SRTA) handicap championship.

When asked for some of his favorite memories Bernie mentioned going to the Olympic tryouts in 1976 and his first 100 straight which he broke a Pocatello in 1970. He said the Pocatello Trap Club made a big thing out of it and he will remember it for the rest of this life.

Spanning over thirty years, the accomplishments of Bernie Voyles show what can be done “when there is a will” to want to compete and to achieve great things. He has been n inspiration to many and the shooters of Idaho congratulate him on this induction into the Idaho Trapshooting Hall of Fame.