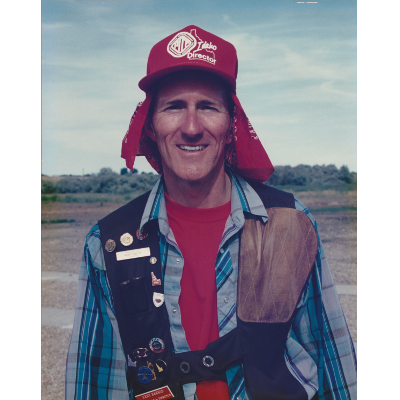 Kent was born in Salt Lake City, Utah in 1943 and moved to Boise as a young child. After a variety of jobs and two years in the Army, he has been a junior high teach for 25 Years.

He started going to gun clubs and turkey shoots in the mid 1950’s with his father who later was a state All-Star, won the Camas Prairie Handicap on his only trip there, and won a Grand American trophy on his only trip to Vandalia. Bus Harris was also very active working at the gun club level and passed on a deep love for waterfowl and waterfowl hunting to his son.

Kent started shooting in 1956 using a humpbacked Remington automatic hunting gun and he began registering targets in 1959. He also started working as a trap boy to pay for his shooting, worked at various clubs as a setter and puller, and supervised trap help a the Boise Gun Club from 1960- 1968 and again for several years in the 1970’s and 1980’s.

Service At The Local Level – He was vice-president of the Boise Gun Club in 1972 and 1989 and was president 1973. He was the secretary and/or director from 1974 to 1983. In 1963 he helped with major remodeling project and in 1972 helped build the new club at its present location. He was awarded on of the first Honorary Life memberships of outstanding contributions an service to the Boise Gun Club.

Service At The State Level – He was PITA State Association president for 11 years and secretary for 11 more. Idaho stated delegate to the Grand Pacific for 13 years. He has served as the secretary of the Idaho Trapshooting Hall of Fame since it was formed in 1987 and has salvaged, saved, and collected much material relating to the history of trapshooting in Idaho.

Service At The National Level – he has served as a member of the PITA executive committee in 1981 to 1984 and 1987 to 1988. Kent was PITA central handicap committee member 1977 to 1994. He has been in the Idaho representative to the PITA rules committee for many years and has worked hard for changes and reforms to make trapshooting more “shooter friendly”.

Shooting Accomplishments – Five Idaho State Championships – ATA Handicap in 1963 and 1983, PITA handicap in 1962, doubles in 1974 and singles in 1991. Three 100 straights in handicap. Two from 27 yards – each of these was the first 100 in handicap from any yardage at that club location. GRAND PACIFIC – winner Harold Wooley Memorial Handicap with 100 straight from 25 yards in 1997, third place Grand Pacific Handicap in 1977 with a 99 from 27 yards. Class AA High Over All Champion in 1988, third high in the Joe Ruddy Handicap in 1991, various yardage, singles, and doubles wins over the years. GRAND AMERICAN – back to back 98’s in the preliminary handicap and the Grand American Handicap in 1990. Winner of the J.O. Cotant Memorial handicap at the PITA State Shoot – twice. Also was state AA High Over All champ in 1984 and state High All Around runner up in 1991 and assorted wins from many ATA and PITA state shoots over the years. SOUTHERN IDAHO CHAMPIONSHIPS – doubles champion in 1979 and 1984 and singles champion in 1982 and 1991. High Over All champion in 1991. Boise Gun Club champion six times and Caldwell Club champion three times. High Over All champion and handicap champion the Idaho Centennial Shoot in 1990 and repeated as handicap champion in 1991. First Idaho shooter to shoot 100,000 PITA targets and has shot over 90,000 ATA targets also. Had the third high handicap average in the nation in 1962 for the ATA. Twelve High Over All championships in 1989 (seven PITA and five ATA). Treasure Valley Series High Over All champion on 1990 and repeated in 1991. ALL-STAR TEAMS – PITA National Team 3 times – 1986. 1988, 1990. Idaho PITA All-Star team seventeen times – eleven as captain. Idaho ATA State team – several near misses for the first team.

When asked what he likes best about trapshooting, Kent replied that winning is always fun, but the friends you make and the memories of shoots, clubs, and people are the most important things for him.

For almost 40 years Kent has enjoyed the sport of trapshooting, and for the last twenty five years he as actively promoted the sport and encouraged and exposed countless shooters to the hobby of trapshooting. For his combination of dedication, hard work, and shooting skill, we are proud to induct him into the Idaho Trapshooting Hall of Fame.

Since his induction in 1994, Kent has continued to serve and shoot. He retired in 2006 after 35 years of teaching Junior High School science. He and Liz, his wife of 27 years, live in Boise with their two daughters – Susan and Libby.

Service At The Local Level – Kent has been on the board of directors of the Boise Gun Club numerous times – usually filling the office of secretary. For the past four he has done a monthly report for the Boise Gun Club covering target activity and target inventory.

Service At The State Level – Kent spent a total of 31 years through 2003 on the Idaho PITA state board of directors as president, secretary, and director. He continues to chair the annual shoot scheduling meeting for southern Idaho clubs as he has done for over 20 years.

Service At The National Level – He has continued to be a member of the PITA Central Handicap Committee for a total of 36 years and has been Idaho representative for the PITA rules committee for many years also. He also continues to serve as a director for the PITA Hall of Fame.

Other – Kent as spent 15 years campaigning for changes in the handicap system. These efforts culminated in the publication of a forty one pate article in “On Target” magazine in April, May and June 2008.

Kent won the Salt River Trapshooting Association (SRTA) doubles championship twice, once with 100, and once with a 99. He also had 99 once and lost a shoot-off. He has attended the Grand Pacific 43 times and the Grand American twice. He is the first shooter to attend over 100 Idaho state shoots.

He has won High Over All seven times during the nineteen year existence of the treasure valley 500 bird singles marathon. Once by an astonishing 24 bird margin on the a very windy day. He was always considered a good wind shooter and one of his most impressive accomplishments was breaking a 99 from the 27 yard line in howling windstorm at the Twin Falls Gun Club and beating a good field by 13 targets. He has 33 championships at the Boise Gun Club member’s shoots and has been the Caldwell Gun Club champion 6 times.

Kent and his wife Liz have won the husband and wife award at the ATA state shoo twice and numerous times at the PITA state shoot. He is proud of her success as a shooter and gives her credit for her strong support of their sport and hobby.

A bad display of temper earned Kent a scolding from his dad one time and his father told him that if he expected to win all the time he better quit. “To enjoy the game you try to win as hard as you can, but when you don’t, you give credit to those that do and you enjoy the success of your friends.” At the seaport championships at the Lewiston Gun Club on year, Kent lost a tie on every event on Saturday and then on Sunday won both the Handicap and the High Over All. He often thinks of this shoot because it reminds him of his dad telling him to be gracious when you loose but to keep trying hard to win.

Kent’s favorite thing to win at any shoot is the High Over All. It means you were the best of everyone there. He credits the little PITA High Over All pins with making him a much better shooter than when he started. “If I was out of any event I had a tendency to give up. AAfter I won a few of those pins I realized if I wanted to win them I had to work for every bird all shoot long. Even though I’m not shooting as well as I used to, I still want to win those pins and I hate to lose by one target.”

Kent wishes the Grand American would have been closer so he could have gone to more of them, and that he didn’t have to miss many parts of the state shoots because of work. But the shooting and the friends and the people have been wonderful, and he hopes to keep doing it for a long time to come.