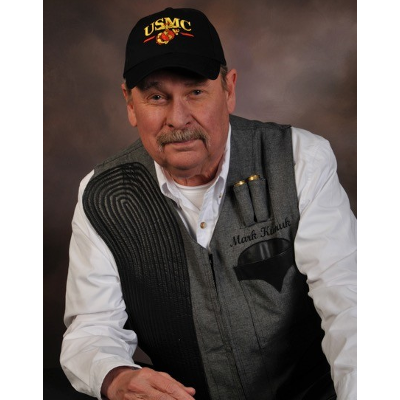 Mark Kurruk shot his first registered targets at the old Miramar NAS in the summer of 1965.  At that time he was stationed at MCAS El Toro and tried to shoot a couple times a month until he was transferred in November of 1966.

After being discharged from the Marine Corps Mark went to work, got married and began a family that did not allow time for much trapshooting.  After moving to Idaho Mark was once again reunited with the sport sometime in the mid 80’s and took to it with a great deal of enthusiasm.

In 1989 Mark came up with the idea of starting a newspaper format for trapshooting in the Inland Northwest.  Mark was a trained photographer in the military and also worked for a couple of newspapers over the years so he took that experience to help start On Target.  The original idea was to cover shoots, ATA, PITA, fun shoots, turkey shoots, as long as it was trap he would try to get it covered in an area that consisted of Idaho, Western Montana and Eastern Washington and Oregon.  He had no idea that it would spread out to the extent that it did.  I sold On Target in 2003 but have remained a contributor and the publication still enjoys a great deal of popularity.

About the same time, Mark began to write reports for the Camas Prairie Handicap when he took over for Veva Baldwin.  In addition to the CPTA he contributed  articles for Trap and Field. Last year he began to write and report for Trapshooting USA so he is now reporting and writing for three publications.

Beginning in 1996 Mark was voted to the Board of Directors for the ISTA. He was secretary/treasurer until 2000, he was President for the first state shoot at Pocatello, then Vice President and another year as a director before taking the job of Chairman of the Idaho State Hall of Fame which he held until 2008.  He currently serve as a CPTA Director.

As for Mark’s shooting accomplishments he is proud to have broken his first 100 straight and was punched to the 27 yard line at his home club at Grangeville.  He has  been fortunate to shoot all throughout the west and also attended a couple of Grand American shoots at Vandalia, Ohio.  At one time there was an Industry class in the ATA and because Mark made my living with On Target he joined.  Mark had some of the best times competing against fellow representatives from all the major shell companies.  Some of these shooters were on par with the best and winning was always a rich reward.

Mark’s greatest reward however is meeting all the great people in this sport. Many friendships made over the past 20 plus years still last today.  He hase been able to travel and shoot, dine, drink and enjoy your company and will hold these memories forever.

Mark has been married to his best friend Sue for 43 years.  They have one son, Scott, who lives in Seattle, Washington.

Mark was born in a displaced persons camp in Germany after WWII.  His mother had to flee the Soviet takeover of her homeland of Estonia.  Mark’s family came to this country with little more than a suitcase each.  To be able to come from that very humble beginning and to be placed here in the Hall of Fame is something he never thought possible.

Mark thanks each and everyone of you for letting him be a part of your community.