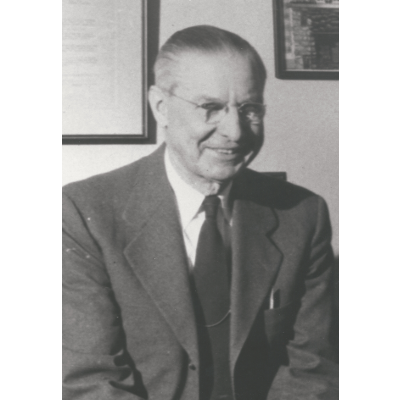 Ralph was very athletic as a young man and had been a very good baseball player, but he became involved in trapshooting as a contributor rather than a competitor, and for over 40 years he devoted great amounts of time and work to the promotion and success of trapshooting in Idaho.

He became involved with the Boise Gun Club in the mid 1920’s and was a director by 1927. From then until 1968 he was either a director or the secretary-treasurer of the club and helped guide the club through a series of location moves, financial ups and downs, and many state and registered shoots.

Ralph hired the help, cashiered many of the shoots and practice days, did the programs and mailings, purchased shells and targets, did the reports, publicity, and follow-up work, and took care of the many details that makes a gun club work smoothly. For many of those years he was the first person a new shooter met and he was responsible for getting hundreds of people involved in trapshooting.

He was also president of the state association from 1950 through 1953 and over the years was responsible for helping put together and running dozens of state shoots. He also had a large part in developing the Idaho State Shoot from where it was a financial burden on the host club, to what we have today, where state shoots are coveted by many clubs.

Ralph, along with J.O. Cotant, was instrumental in convincing the Union Pacific Railroad Company to hold some very successful state shoots at Sun Valley starting in 1940. In 1951 he was selected by the president of the Armature Trapshooting Association (ATA) to serve on the ATA membership committee for the state of Idaho.

Ralph was most comfortable over the years at both the local and state level with the job of secretary-treasurer because he felt it was a most important job that would let you contribute and do a lot for trapshooting without having to be too political. He did it very well as evidenced by his constant re-elections and appointments.

He kept good records and most of what is left of the early state association history is because of this care and efforts in preservation.

Ralph passed away in 1971 and he left behind the memory of a man who enjoyed shooters and shoots and was not afraid to contribute to the promotion of both over the years and it is fitting he be given the honor of selection into the Idaho Trapshooting Hall of Fame.

Ralph worked for M-K Construction during some of their glory years and his office was in the “Barracks” buildings on Broadway just south of Warm Springs, in Boise Idaho. A lot of Boise Gun Club business was conducted in that little office over the years as club officers and members would constantly drop in to get a decision made or problem solved.

Many influential people were friends with Ralph (including the publisher of The Statesman Newspaper for many years). Ralph lived in a small apartment on Bannock Street just behind where the Statesman was published and every Monday morning he would be there with the Sunday results from the club making sure they would be published and the write-ups for the state shoots and other registered events he was able to get were very large compared to what we can get today. Through his contacts he was able to get advertising and donations for the state shoots, good publicity, and other “perks” that helped the Boise Gun Club survive some tough times over the years.

For well over 40 years Ralph helped guide and promote the Boise Gun Club. He move to Utah in 1969 and passed away in 1971.