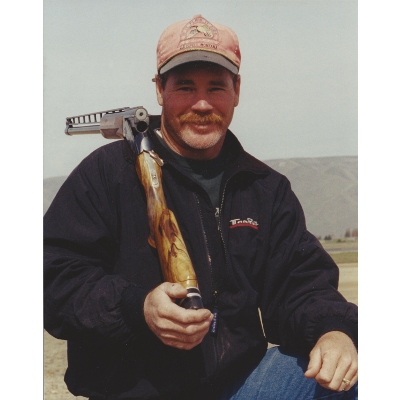 Year Inducted: 2004Stuart Welton shot his first registered targets in 1974. He stopped in 1983 when he went to Guam. He married in 1985, and began shooting again. He was introduced by his father Dwayne and both Stuart and his brother, Tony, got their start working at trap clubs to be able to shoot some targets.

Western Zone:
Stu recorded six wins from 1991 to 2002 with trophies in singles, doubles, handicap and All Around. In 2003, he tied a record with 399×400 and won the High All Around Western Zone Championship. He also won third place in the Handicap Championship with 100.

Idaho State:
Stu has won 73 Idaho State ATA trophies beginning in 1977. This includes his first 200 straight as a Junior that won the Singles Championship in 1980. He won 17 years old and had a two bird lead over the rest of the field. In 2001, he won a shoot-off that set the one day ATA record with 625 straight, he also ran all the singles on that day as well. In 2003, he tied the record with a 99 to win the Handicap Championship ans set the state record of 396 to win the High Over All Around Championship. He has won Championship titles in each discipline, High Overall and High All Around several times. He has been on the Idaho State Team 18 times and has been the captain 12 times. He has been captain every year since 1995.

Camas Prairie:
He has taken ten trophies at this dominant shoot since he first attended in 1991. These include open Handicap Championship twice.

Stu completed his Grand Slam in 1991 with his first 100 in doubles in May at the Golden West Grand. He was also a member of the 1978 Sub Junior All American Team. Other wins include several PITA State Championship in 1981.

His number of wins at all of the local one or two day shoots is unknown but the number is huge.

Stu may be the best natural trapshooter from Idaho, or for that matter the Northwest, in recent history.

Stu lives in Star, Idaho with his wife Realeen, daughters Tanea and Chandis, and son nick.

The follow are ATA records that Stewart Welton Holds: