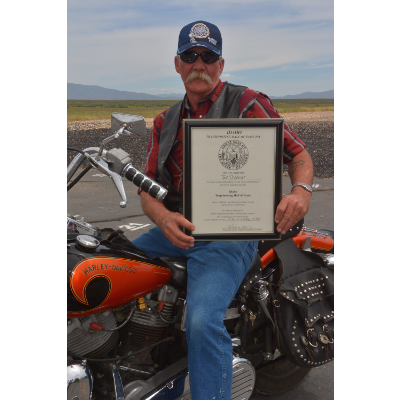 Ted Schlecht began shooting registered trap in 1995 and showed very early promise from his first shoot. He won the Class C ATA singles with a 195 and in the PITA state shoot he dominated C Class by winning Class C runner-up in doubles, singles runner-up, and to make things sweeter he took the Handicap Championship Runner-up.

Growing up at American Falls in 1958 with his brother and sister he has worked in construction and has been involved with building many of the finer homes in and around the Sun Valley area. Like most Idaho boys, Ted was taught to shoot by his father and has hunted and fished all of his life. Ted was also a successful competitive archer before taking up trapshooting.

Ted’s interest in trapshooting goes beyond breaking targets. He has held leadership positions in the Wood River Gun Club and the Idaho PITA, and is an informed active member of the shooting community. He has shared his knowledge and expertise with many new shooters. Ted was often seen helping his good friend Louse (Weeze) Benners, asking other shooters to help her move from post to post and keeping an eye out for her.

While his list of wins is very large and encompasses shoots throughout the west including eight placements on the Idaho state teams, achieving his grand slam in June of 2009 and a host of High Overall and High All Around titles but he will be remembered, at least by all of those in attendance, for his legendary shoot-off against All American shooter Stu Welton in 2001. The two obliterated the former long run with no misses until the very end (no carryovers or shooting the next day) as Ted ran 622 straight targets while Stu broke 625. The two also ran the 100 singles targets in the event that morning. The previous record was 425. Ted loved the challenge of shoot-offs and had the honor of standing next to the likes of Leo Harrsion, Phil Kiner, Kent Harris and Stu Welton to name a few.

Ted’s trapshooting family enjoyed the true camaraderie, friendship and horseplay and teasing (the dreaded chicken for losing a shoot-off). This group was called the Rat Pack and included Ted, Earl and Harold Ward, Bob Crist and some others from time to time. That group shot some of the highest scores in the state and then rode off into the sunset on their Harleys.

Along with his wife Sherri they have raised five sons and enjoy 11 grandchildren and still live in the Bellvue, Idaho area.