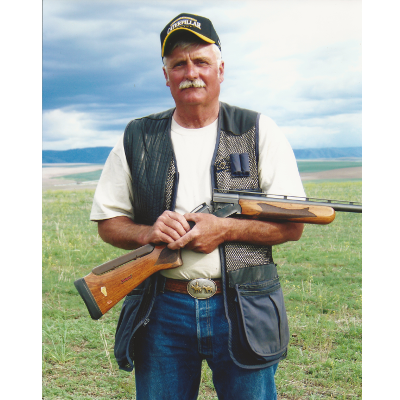 Spud has always been an active contributor to trapshooting sports. He first started shooting as a member of the Culdesac Gun Club, where his father is a founding member. He has served as an officer there many times, remaining active today. Ha has participated as a member of the ISTA Board of Directors’s for at least 2 terms serving as president in 1984 and 1988. Spud is a member of the Lewiston Gun Club, where he has helped with many activities, shoots and fund-raising events. Currently he is on the BOD as Lewiston and has served two years as president. He has been a member of the Camas Prairie Trapshooting Association (CPTA) Board of Directors for at least two decades, currently representing the Lewiston Gun Club. Throughout the region everyone knows that Spud is willing helper, and he is often seen assisting with scoring, setting traps, shoot-offs and other activities that are necessary to make shoots run efficiently.

Shooting is a shared pastime with the Storey family. Spud and his father have frequently shot together. In 1982 Spud and his father Stanley shot off in a five person shoot-off for the ISTA State Singles Championship. They both lost the shoot off and continued to shoot against each other for the Clsass Championship, with Spud ultimately prevailing. Stanley was glad Spud won; Spud was disappointed Stanley didn’t win, but typical to the family competitive ethic both did their best, not giving the other and edge. During the early 1970’s it was common to see the “Storey Boys” (Spud, Stanley and Randy – Spud’s brother) at regional registered and turkey shoots. The Storey Boys were tough competitors in all events, but particularly in skin games or other events when tangible rewards were on the line. Spud has also shot targets with his nephew Ira, his father-in-law Alvin Connerley, wife Kathy Connerley and his son and daughter Conner and Ali Storey. His patience in shooting with new or less skilled shooters is well recognized; his willingness to assist them in developing shooting skills is appreciated.

Spud’s shoot-offs experiences are legendary. Early in his shooting career he won a trophy from the Lewiston Gun Club for losing 10 consecutive shoot- offs. It was a horses rear end mounted on a plaque. Spud went on that year to reach 15 consecutive losses in shoot-offs before being successful. The gifting of the Lewiston trophy underscores the characteristics of good sportsmanship and sense of humor that Spud possesses.

Spud was born and raised in the Culdesac, Idaho area, where his family has farmed for three generations and where he currently farms. He married Kathy Connerely in 1981. He and Kathy have two children, Alana (Ali) and Conner.