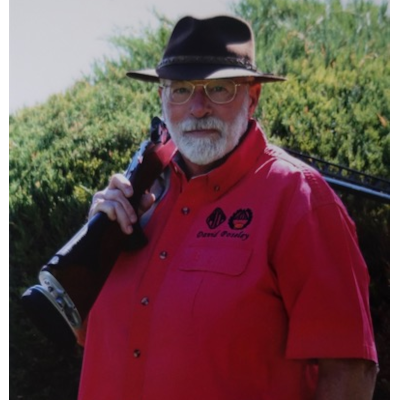 The Hall of Fame Board would like to thank David Poseley’s daughter Renae Poseley James for her wonderful effort to describe the history behind this year’s inductee into the Hall of Fame. Please keep in mind that there is not enough space here to list all of the wins that David has brought home in the years he has been trap shooting.

It all began in 1958. At the age of 10 David began working at a trap club in Colorado as a puller. At that time, being a puller truly meant you were going to “pull” birds all day, and he worked for birds and not wages. There were no voice calls or buttons you could push, and he would pull a long bar back, and when the shooter yelled “pull,” he would release it. Unfortunately, as it is today, kids couldn’t afford this sport without the help of someone else. He was determined, even at his young age, not to be beholden to anyone, so he did the second-best thing—if he couldn’t compete in the sport, he could work at a club and learn as much as he could about the sport from shooters. He has always had a love for guns, and trapshooting just called to him. That was the start of him becoming the great competitor and trapshooter he is today.

David has volunteered to teach children and adults how to shoot. If anyone he knows shows interest in this sport, he is the first to invite them to shoot, and offers to teach them. For a child shooting, David is the first to volunteer his time, his ammo, and a shotgun that is fit just for the child. The majority of people he has taught have become registered shooters, and still shoot trap to this day.

David has been deeply committed to going to as many competitions as he possibly can. Over the last 23 years he has traveled to Hawaii, Washington, Nevada, Utah, Arizona, Montana, and of course, all over the state of Idaho. During this time he had a very large number of wins, including wins at the Grand Pacific, the Idaho ATA state shoot, and the PITA state shoot.

Some of his major wins include:

David earned selection to the Idaho PITA All-Star team seven straight years—from 2010 through 2016, and was captain or co-captain three of those years.

He shot 100 straight from 27 yards at the Twin Falls Gun Club, one of only five in the entire PITA that year.

David has also fired at over 55,000 PITA registered targets, and many more with the ATA.