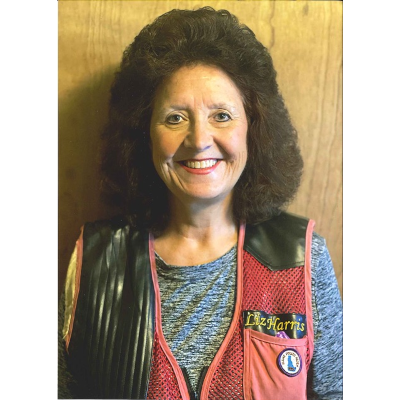 Liz Harris will be joining her Idaho State Hall of Fame husband Kent to form the third husband and wife teams in the state Hall of Fame. Virgil and Veva Baldwin and Dan and Darlene McKenzie are the other two.

Word has come the Liz will also be inducted into the PITA Hall of Fame at ceremonies at the PITA Grand in July. A very well deserved honor for a person that has put so much effort and volunteered so much of her time and energy to make the shooting experience so much better for all of us.

Liz began shooting at the Boise and Caldwell Gun Clubs in 1982. While these would become her two “home” clubs over the years, she would also had memberships in several others, including Ontario, Twin Falls, and Burley.

In 1984 Liz shot her first registered target. In her shooting career, Liz amassed an impressive list of wins and awards within both the PITA and ISTA.

Liz was a 29 time member of the Idaho PITA All-Star Team, six times as Ladies Team Captain or Co-Captain. She was the first woman shooter from Idaho to register 100,000 PITA targets, and earned placement on the PITA High Over All teams list in C Class in 2015 and B Class in 2019.

Over the past 30 plus years has served as an official for the Idaho PITA and an un-official representative at the PITA executive level.

Over Liz’s shooting career of 36 years, she roamed the Northwest, shooting at clubs in Idaho, Oregon, Nevada, Washington, British Columbia, and Utah. At many of these clubs (especially the smaller ones) Liz was quick to lend a hand where she found a need, and helped several clubs with their first registered shoots.

Liz and Kent Harris married in 1986. Along the way, Liz raised two daughters and had a 31 year teaching career. She shot when she could, but not as often as she wanted. In 2007 she was punched to the 25 yard line, and looked to be on her way to the 27. But, she ran into health problems that affected her shooting, and eventually caused her retirement from teaching.

Liz has spent time in the past few years being a caregiver to several family members. She hopes to continue shooting in the future, adding more clubs (and wins) to her list, while meeting new people and continuing to enjoy the sport of trapshooting as she has over the past four decades.