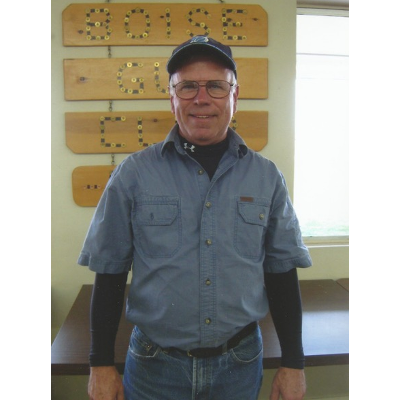 John was born at San Jose, California and graduated High School at Los Gatos in 1967. He enlisted in the Air Force and served from 1967 to 1971 as a Missile Technician. He was honorably discharged with the rank of Sergeant.

After leaving the military John became a glazier and 1972. In 1983 he moved his family to Boise and began Vista Vacuum. The business grew in to Vista Vacuum and Framing and then to The Finishing Touch Frame Shop which is still on operation today.

John had many hobbles including a love for aviation. He got his pilot’s license flew model airplanes and gliders. He loved to hunt an was always fishing. He also enjoyed scuba diving and made 200 dives, many in Hawaii with his friend Steve Eichenberger.

John is survived by a sister, two daughters, six grandchildren and eight great-grandchildren.

John began trapshooting in the 1970’s while still in California. After moving to Boise he often made trips to California to visit family and friends and usually shot while there One of his favorite clubs was George Ahart’s Coon Creek Gun Club. John began shooting ATA registered targets in 1980 and started PITA registered targets in 1984 after moving to Idaho. He shot over 94,000 registered ATA targets and had over 70,000 in PITA targets.

He considered Boise and Caldwell to be his “home” clubs but he also shot at Ontario, Mountain Home, Twin Falls, Pocatello, Burley, Wood River Lewiston, Grangeville and many other clubs throughout the Northwest. He attended almost all of the Camas Prairie and PITA and ATA State shoots no mater the location. He also attended the Grand Pacific many times at Salem, Stockton, Evergreen and may others. Every shoot to him was a “fun shoot”.

The shooting awards and wins are more than numerous. He had 100 straights to win trophies at the Grand Pacific and other high scores for more trophies At both Idaho State PITA and ATA it is difficult to determine an exact number as John did not keep a record. He was more interested in attending the shoots and making friends than keeping score of trophies but the list does include wins at Oregon State, Washington State Montana State along with Western Zone shoots.

He was a great contributor to the sport at local and state levels. John served on the Board of Directors at Boise many times holding a variety of offices and was the driving force in having the club become computerized and was also responsible for obtaining registered shoot cashiering software for the club.

His contributions to trapshooting were not limited to his home club however. In about 1990 John began to serve on the Idaho PITA State Board of Directors and for the next 25 years he served on the board numerous times but was always helping with the state shoot program, advertising, trophies and taking pictures plus all of the other jobs that go into a successful state shoot.

John loved to shoot and it made no difference to him what it was. He often said “I am for the shooters, if they are happy then the clubs will survive.”

The Idaho Trapshooting Hall of Fame was another shooting organization that benefited from John’s efforts and contributions. He donated a great deal through his business to provide the display cases that house the pictures of the Idaho Hall of Fame Inductees. He had to go through several different designs before he got what he liked and what we are using today.
John did not like the spotlight and much of what he did and donated was behind the scenes and for over 30 years he enriched the sport of trapshooting in Idaho. He enjoyed it and he had a lot of fun and made a lot of friends doing it.