Trapshooting event returning to Pocatello after more than 25 years

By Shelbie Harris For the Idaho State Journal May 26, 2016 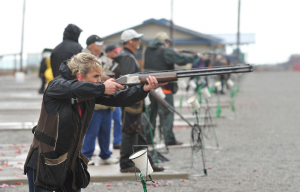 A competitor at the Pocatello Trap Club takes a shot during a shoot (2015)
Photographer: Doug Lindley/Idaho State Journal

Randy Adams, the 15-year president of the Pocatello Trap Club and Idaho PITA president, expects hundreds of shooters from all over the Northwest to attend the three-day event from June 3 to 5. It will be the fourth time since 1931 the local trap club will host the event.

“It feels terrific to have it back here in Pocatello, and it’s great for our community,” Adams said. “We consistently want to interest more shooters and try to keep Pocatello in the rotation.”

Willis Norton, who has been the Pocatello Trap Club director on and off since 2000, is confident the best place to host the event is in the Gate City area.

“Our facility is by far nicer and prettier than any facility in the state of Idaho,” he said. “Our RV parking is all grass, we have a bigger clubhouse than Boise, Caldwell or Twin, and if you come and look, I think our grounds are better kept.”

“Some of the participants may have never participated in a trapshooting event, and others have been shooting trap for 30 years or more,” Adams said. “These people are shooting with everything from a $500 shotgun up to a $20,000 one.”

A free pizza party will be held Friday, June 3, compliments of the Idaho PITA. On Saturday, a steak dinner with Dutch oven potatoes and salad will be provided at $10 a plate.

On Sunday, a memoriam for John Booth, who served on the Boise Gun Club and Idaho PITA Board of Directors, will be held. Officials will also induct Mike Rinard, the owner of Post 4, a shooting safety glasses company, into the Idaho Trapshooting Hall of Fame.

“Mike’s been a wonderful asset to trapshooting,” Norton said.

Target and trophy fees are $32 per event with a $3 PITA fee per shooter each day and $2 state fee per event. Non-compulsory purse and bonus fees will vary per shoot.

The Pocatello Trap Club is located 8 miles west of Pocatello off Interstate 86. Take exit 56, turn toward the airport and follow the signs for the club.

“We have an opportunity to bring over 150 people into town, and some of them will camp out at the event,” Adams said. “But a lot of them will stay in hotel rooms, buy fuel and eat at the restaurants in town, so it’s very good for the city economy and the club’s.”